N SCALE MODULES:
Since 2004, we have used the Bend Track standard with great success.  For many years, the group was made up of mostly N scalers and the majority of our shows reflected this fact.
However, the popularity of using Free-mo among HO scalers has spilled over to the N scale side of the SLOMRA.  Phil Lawyer first created two Bend Track balloon modules which he could run independently from the group or be part of the whole modular setup.  Then Phil built a T-module that had an N scale time-saver built in the middle and created a wye down to the leg of a T which could connect to Free-mo N modules.
Recently, Phil has built the group’s first Free-mo N style module.  The biggest modification is the continued use of code 80 track inside of of code 55 as specified by Free-mo N.  Another feature Phil built into his Free-mo N module was removable scenic wings. If room permits, Phil simply adds the wings which have mountains on them to widen the modules presence. 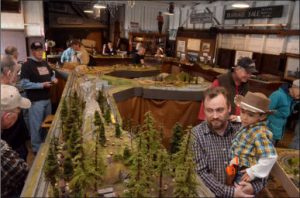 Several of our N Modules are built into different shapes allowing us to reconfigure the layout so as to make it look new at every show.The trees in the foreground are scratch built by Chuck Ellison and his modules feature an upper loop representing a small logging camp. (left) 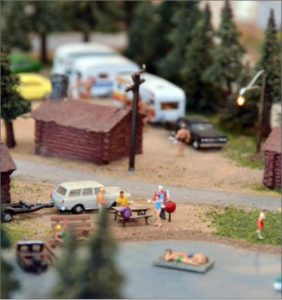 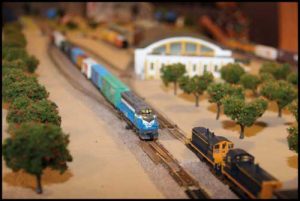 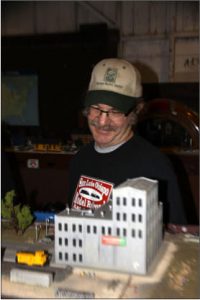