Previously, the SLOMRA used to follow the module standards set by the NMRA, however, with a change in membership, we have switched over to a Free-mo style modular system.  We have adopted many of the standards of Free-mo, however, we made some modifications to suit the needs of our current membership

But we did not stray too far from the standards and we are still able to connect and run with other Free-mo groups in California.

This is Sheldon’s first attempt at building a module and he made the most of his space to represent Avila Bay.  Sheldon has a lot of practice with scenery.

The father and son team of Bill and Henry Bordeaux prepare

Henry’s module for a show in Sacramento. 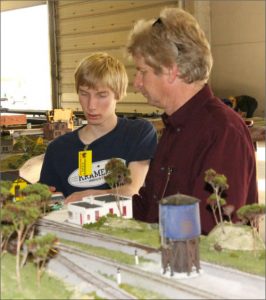 Janek’s fantasy scheme SPSF DD40 rolls past Steve’s intermodal train which is sitting in the siding of Steve’s first module. 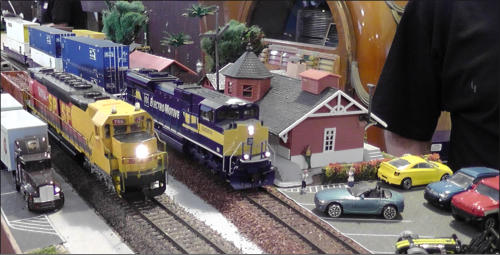 Our latest group module can be connected to standard Free-mo as well as our alternate mainline standard of 3.5” from the edge. 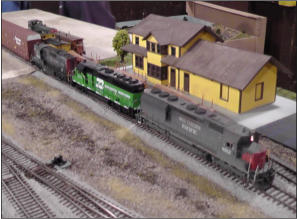